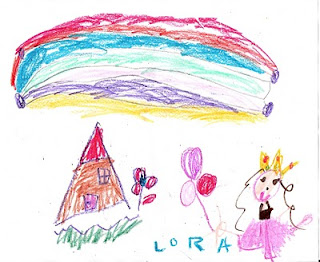 I had a very interesting conversation with my child last evening.

She has a friend at school, she's telling me. One I had not heard her talk about before. A boy. And she seemed quite enamored of him as she talked about how funny he is and how cute he is and much he makes her laugh and how much she likes him.

"Oh?" I said, half teasing as I chopped vegetables for dinner. "Is this a new crush?"

"No," she said. Quickly. Too quickly.

Then there was a pause.

"I know this might sound offensive," my 10-year-old child said, her voice rising an octave with worry and a little bit of fear. "But I would rather date somebody who is the same race as I am."

Even as a pre-schooler she would refer to her African American classmates and anyone else she knew as "brown." "That brown man," she would say. Or, "The brown boy in my class."

I always thought of it as childhood pure. She didn't see their race, she just saw a distinguishing characteristic, like the blond, the brunet or the redhead. The brown kid.

"Well," I corrected gently. "They prefer to use 'black.' Or African American."

Then I tried to give a brief summary of overt racism in America, how that used to be "the adjective," but now it's insulting. And, for good measure, I figured I'd give her a life lesson.

"Say it once so I know what it is," my future lawyer-child said.

And I wanted to wash my own mouth out with soap.

She had never heard the word before. And I introduced it to her. I guess I had to. Maybe not. Maybe I could have, should have said no. Then again, I'd rather her hear it from me than someone else.

And she would have heard it -- eventually.

There are people in my family who still use it on a regular basis -- and not necessarily accidentally. It's a word I grew up hearing, in different times with different mores.

Then again, she could hear it on the radio or on TV and not know that it's a word she's not supposed to say. It's my job to teach her.

"Is it a nasty word?" my child asked me.

"Oh," she said, before getting to the real heart of the matter.

And the moment was gone. I can only hope I taught her well.

I was reminded of my junior year in high school when the our student body overwhelmingly elected a hilariously funny African American girl, who also happened to be the head cheerleader, as the homecoming queen.

After the game, my friends and I were heading to the big party at a classmate's house. She wanted to go to, but had no ride.

She quickly agreed and I was thrilled. The most popular girl, the head cheerleader, the homecoming queen for God's sakes, was going to be riding in my car. It was a pure John Hughes moment.

But when we stopped at my house so I could change, my parents nearly died. They weren't impressed with her credentials, the sash over her shoulder nor the gleaming crown on her head. They just thought I had lost my mind.

And when I got to Loyola, one of the first people I looked up was another former school mate, who had gone on to Tulane as a pitcher. Nice guy. Funny guy. But the kind of guy my parents would never let me date because he also was a Houma Indian. And we had a not-so-nice slang word for that, too.

Now I'm standing in my kitchen with one, a Houma Indian, adopted as a baby from my own home town and now asking me questions about race and color.

We both have a lot to learn.
Posted by Lori Lyons at 9:35 AM

Email ThisBlogThis!Share to TwitterShare to FacebookShare to Pinterest
Labels: black and brown